skip to main | skip to sidebar

According to Le Soir, the largest newspaper in Belgium, Misha Defonseca just admitted that her story was a hoax: Article in French!


European Newspaper Articles continue to Pour In
Correspondents in Europe continue to send articles in French and Dutch from European publications as the controversy around this story grows. Links have been added to the link list at right. Most are in French. The Flemish article is written in Dutch.

We will continue to add links as they are sent to us.

Parlez-Moi Blog has added another article "Too Many Questions" which includes information from genealogist Sharon Sergeant on how she and two professional associates made the discoveries that led to finding the Baptismal certificate and the school record.

Belgian Newspaper LaMeuse Article
Yesterday a newspaper in Belgium, La Meuse, ran an article which included interviews with two women, Alice and Fernande, who were childhood friends of Misha Defonseca. A rough translation and synopsis of the article is posted on Parlez-Moi Blog.
Posted by Jane Daniel at 9:45 AM 6 comments:

Two Documents from after the Trial

These two documents were uncovered after the trial in the lawsuit Misha Defonseca brought against her American publisher, Mount Ivy Press. They are posted here because they provide information about her name and birth. The first is the Deed to her house registered on November 20, 1985, which indicates that the property was held by Maurice J. Defonseca and Monique Ernestine Defonseca. The name Ernestine does not appear in the American or European editions of the book, but does appear on the baptismal record from Etterbeek. 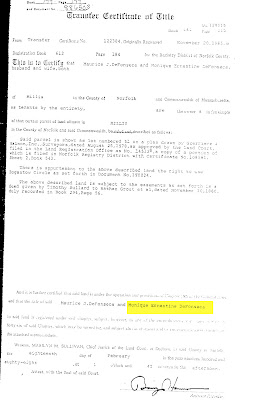 The second is a Taxpayer ID Card attached to a joint bank account with her husband, Maurice, which she signed as Monique (Misha) Defonseca on August 6, 1998. On it she states her date of birth as "05/12/37", her place of birth as "Etterbeek, Belgium" and her mother's maiden name as "Donville". This information is consistent with the baptismal record, except for the spelling of her mother's maiden name which is spelled "Donvil" on the baptismal record. This would suggest that the differing date of birth, 2/9/1937, on the school record may well be a clerical error. The father's name on the school record, Robert, is consistent with that on the baptismal record.
Both documents can be enlarged by clicking on them. 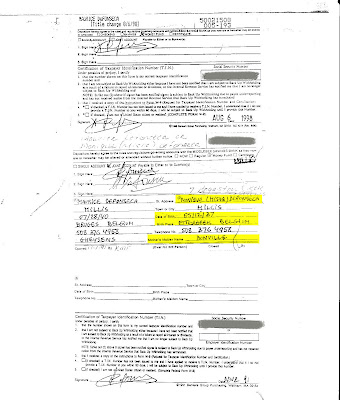 In the past week, since posting Misha's baptismal and school records, this blog has had hundreds of hits from France, Belgium and other European countries. A number of articles have appeared in European publications and blogs denouncing Misha Defonseca as a fraud. Copies of the documnts posted here and at Parlez-Moi Blog have appeared on these blogs. Those links have been added to the Links column at right. Those printed in French are so noted.

We wish to especially thank Serge Aroles, an outspoken critic of Survivre avec les loups. You can see his comments on Loup.org ("Loup" is French for "wolf"). We are grateful for his supportive blog posts, articles, and emails. And thanks are also due to the historian Maxime Steinberg for his article in Regards, Revue du Centre communautaire laic juif de Belgique, in which he also denounces Misha's story and refers to it as the "greatest swindle of the decade".

Articles will be added as we are made aware of them.

Thanks to all for their help.
Posted by Jane Daniel at 8:09 AM 4 comments: 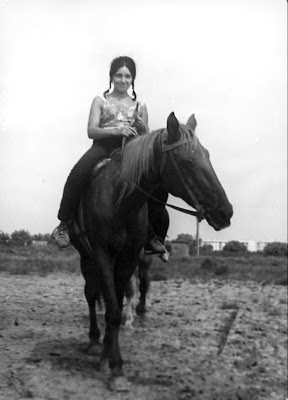 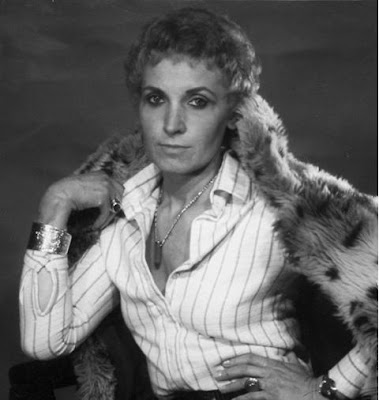 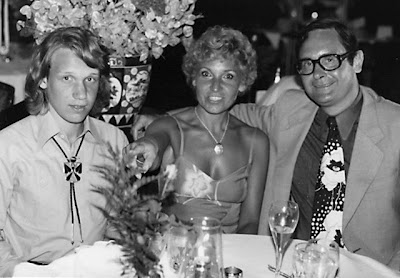 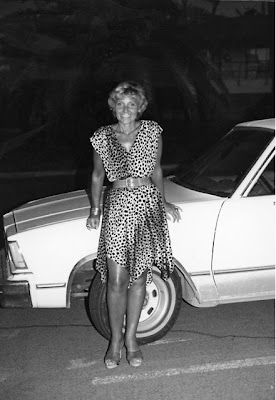 The following is the Curriculum Vitae for Maurice Defonseca, husband of
Misha Defonseca. As the summary indicates, he has had an illustrious career
in Belgium, the Netherlands and France. Maurice and Misha were married in
1973.

Is there anyone among the readers of this blog who knew the Defonsecas
during this earlier period of time? Specifically, I am interested in
finding out when Misha began to claim that she was a Holocaust survivor.

Does Anyone Recognize These Pictures?

In August 2007 when this blog was begun it was with the hope that more information about the woman who calls herself Misha Defonseca would be made available. Below are documents that have been supplied to the author of this blog which present information previously unknown.
Click on the images below to see an enlarged version. Higher resolution images are available upon request. 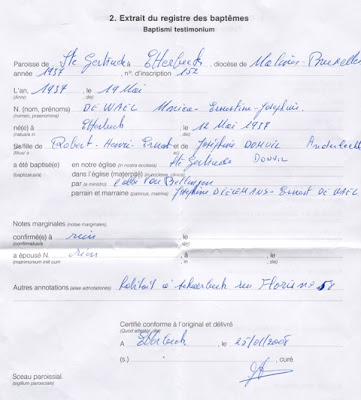 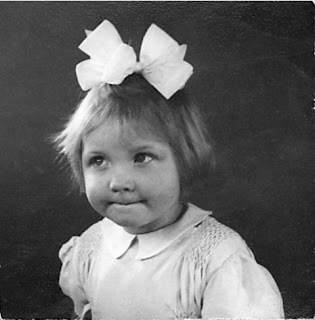 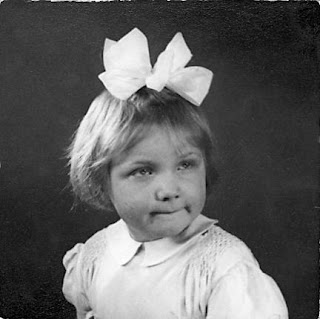 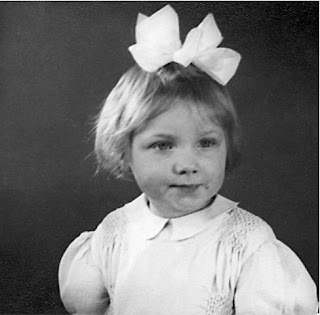 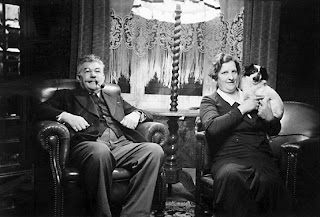 Above and below: 1940's photos of Monique and her paternal grandparents Ernest De Wael
and Marthe Coulon. 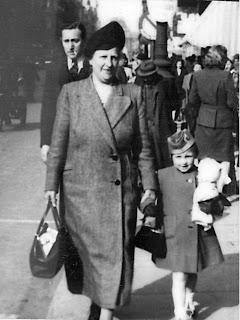 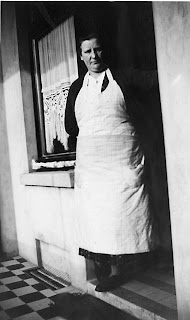 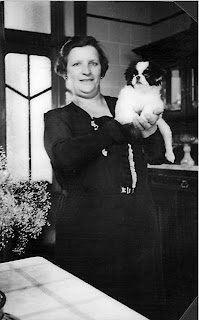 This is a letter I sent to Misha for which I never received a reply.

Dear Mrs. Defonseca,
We have not spoken for more than a decade but I'm sure you remember me. I am
currently writing a book about the litigation associated with the book,
Misha A Memoire of the Holocaust Years. I have come into possession of an
official document bearing your signature that raises numerous questions. I
wanted to be fair to you and give you a chance to explain certain
discrepancies.

On this document, signed by you in 1991, you state that your mother's maiden
name was Donville, and that you were born in Etterbeek, Belgium on May 12,
1937. This indicates that you were, indeed, four years old at the time you
say you began your 3,000 mile journey, not seven as you have repeatedly
claimed.

This information raises a number of other questions regarding statements you
make in the English edition, Surviving with Wolves.
1. You say that your parents were Reuven and Gerusha, but you never knew
their surname. Your father, you say, was German and your mother a Russian
Jew with an accent so thick she hid in the house to avoid being found out by
the Nazis. Why would a woman with a French maiden name speak with a thick
Russian accent?
2. You apparently were born in Etterbeek, not Brussels, yet you say that
Grandpere found you after the War from "fake" birth records for Monique
Valle in Brussels. How can this be?
3. The surname given you by the people who took you in after you lost your
parents was DeWael in the American edition, Valle in the French and U.K. editions.
Why the discrepancy?
4. In the Epilog, you say that you went to "the Town Hall" to "correct my
identity." In what town?
You have referred to yourself using all of the following names, at one time
or another:
Mischke
Misha
Misha Defonseca
Misha E. Defonseca
Monique Ernestine Defonseca
Monique Valle
Monique De Wael
Misha Levy Defonseca

You seem to have begun using Levy as a middle name at the time you signed
the publishing agreement. That is your son's surname and
your first husband's surname. Why would you begin using your first husband's
name again, many years after that marriage ended and you remarried?

As you are aware there have been numerous Holocaust experts who have
questioned whether your story is a hoax. I have never seen any attempt on
your part to put their skepticism to rest, although there are documents that
could substantiate your story, if true. For instance, when you emigrated to
the U.S. you would have been required to file an Application for Immigrant
Visa and Alien Registration. The information on that form (#OF-230-I)
includes:

If you did not have all the information required on this form there would
have been an indication of that in processing your application. Every
immigrant at that time was required to provide this information to the U.S.
Consulate in the country of origin and to the INS (Immigration and
Naturalization Service, now Homeland Security) here. The information was
used to perform a security check and became part of your Immigrant Visa. You
were also required to supply a long form birth certificate and a valid
passport and a marriage certificate and divorce or death certificate for any
previous marriage. There is no shortage of official records that you could
use to refute allegations of fakery.

It appears that your husband, Maurice, filed Chapter 13 Bankruptcy on
2/15/2001, this despite the Trial Court's finding that "the Defonsecas'
three bank accounts reveal deposits between December 1996 and February 2000
of over $243,700. The evidence never made clear how, notwithstanding that
amount of deposits, the Defonsecas were claiming financial hardship, such
that their home was foreclosed upon in 2001." This figure, you will recall,
was based on evidence we provided of wire transfers into your accounts from
foreign banks, and did not included deposits you made in the U.S. A March,
1999 Boston Globe article by Steve Bailey, stated "Defonseca says she and
her husband, Maurice, are in danger of losing their home and have been
reduced to taking food from Jewish charities." You are quoted as saying that
you were reduced to eating dog food. How do you explain this in light of
your income during that period?

Before I go forward in raising these questions in my book, I would like to
give you an opportunity to address them and provide any documentation that
you feel supports your story. I look forward to hearing from you.